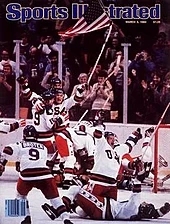 In the waning days of the Carter Presidency, America was in gradual decline, and its enemies grew stronger. America was crippled by slow economic growth, lower workforce participation, and the oil crisis. Troubles abroad, included the Soviet invasion of Afghanistan, and the Iran Hostage Crisis. The American people needed a win, and on February 22nd, 1980, the U.S. Men’s Hockey Team delivered the win America needed, by beating the U.S.S.R 4-3, in what has been culturally known as the “Miracle On Ice”.

Both teams went undefeated in the group stage. The United States tied their opener against Sweden 2-2, then proceeded to beat Czechoslovakia 7-3, Norway 5-1, Romania 7-2, and West Germany 4-2. The Soviets had a much easier time in their group, with lopsided victories against Japan 16-0, Netherlands 17-4, and Poland 8-1, and close victories against Finland 4-2, and Canada 6-4. It was the tale of two teams. The overconfident Soviet Union, and the humble U.S.A. team flying under the radar.

The Match was played in front of a sold-out crowd in Lake Placid, New York. After the first period ended with a tie score of 2-2, Soviet Coach Viktor Tikhonov pulled the starting goalie Vladislav Tretiak in favor of Vladimir Myshkin. This seemed to work in the second period, as the Soviets took a 3-2 lead. In the third period however, the U.S. powered back and scored two unanswered goals and ultimately finished the game with a 4-3 victory. Al Michaels famously called the closing seconds of the game, “11 seconds, you’ve got 10 seconds, the countdown is going on right now! Morrow, up to Silk. five seconds left in the game. Do you believe in Miracles? Yes!”

The historic win allowed the young American team to advance to the Gold Medal Match against Finland, which the U.S. won by a score of 4-2. On February 25th, 1980, the Gold Medal U.S. team visited Jimmy Carter at the White House.